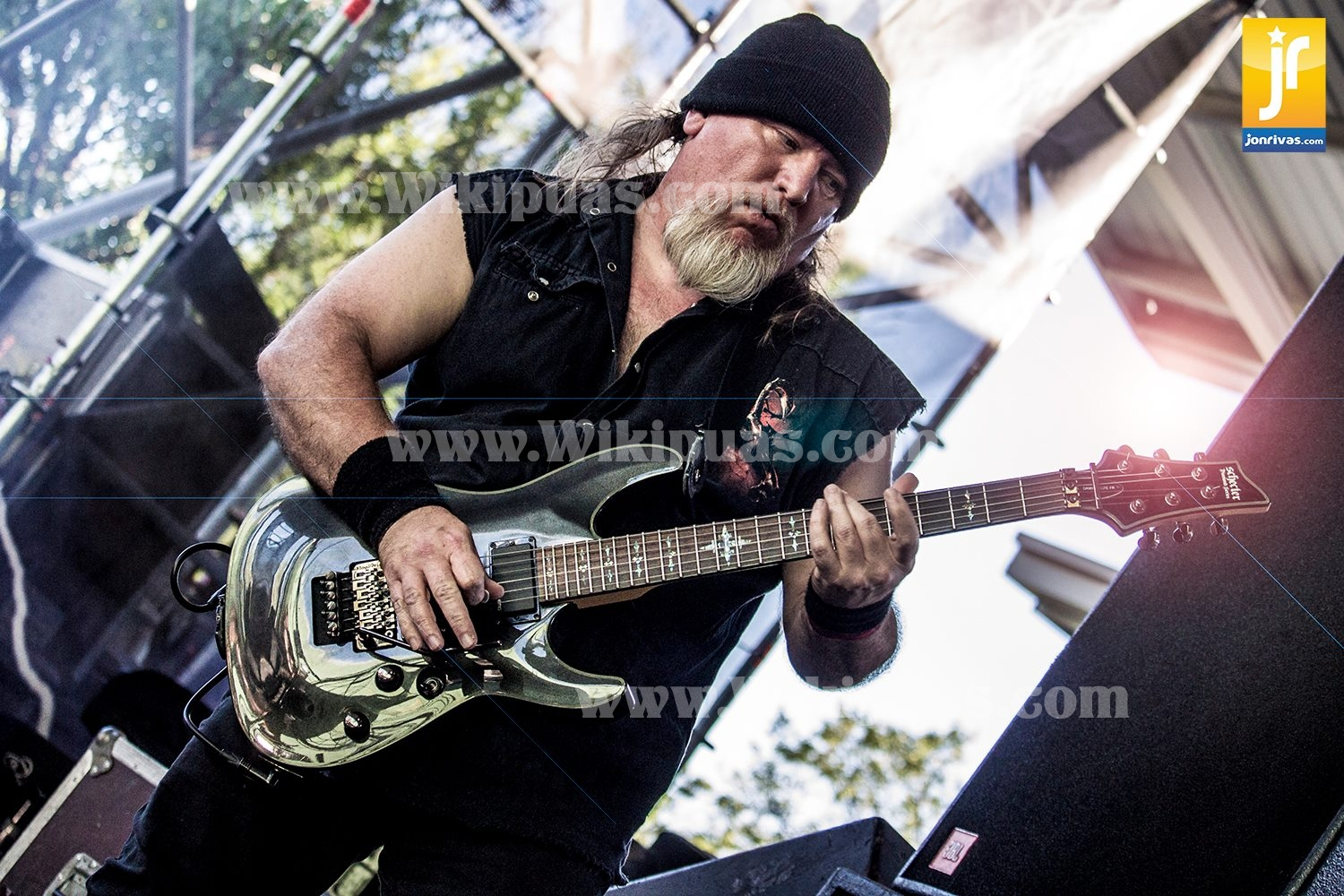 After watching their awesome show at Leyendas del rock festival a couple of days ago, we had an interview with the legendary British metal band: Blitzkrieg. Ken Johnson has not only answered our questions about the band’s custom guitar picks, but also has revealed us the incoming projects of Blitzkrieg and many more. Prepare yourself for this awesome article!

Do the band have custom guitar picks? How many models have you used?

Do you know how many picks have ever been customized for the band? We know that some bands loose the track, and others keep a control of all the different pick designs that they have used.

Between myself , Alan and a couple of ex –members id say quite a few to date.

When and why did you started to customize picks?

I think as a fan myself it shows exactly who it belonged to where as a standard pick is great but it could be anybodys?

Like in many bands, there are more than one guitar player in Blitzkrieg. Do they use different models? Does the bass player use picks or just his hands?

How many picks does the band throw in the concerts?

That depends totally but ive seen us go through quite a few sometimes in a single show , also depends how many we have with us at that moment of time.

We think that pick collecting hobby is getting bigger and bigger in recent times. Are there a lot of pick collectors who ask you for a pick after each concert? Do the front rows fight for your picks at live shows?

Well theres a few , I collect them myself so i know what it is like , yea seen a few squabbles in the past for picks , set lists etc lol.

We know that a lot of bands have started to sell its custom picks at the shows or even on their websites. There are also bands that have different models for live playing and merch stores. What do you think about it? Do you sell your picks?

Nah we don’t sell our picks .. i guess its a thank you from us to whomever wants a pick , for the bigger bands you cant blame them though if they gave away one pick to every fan lol…

We have recently started to organize meetings in different Spanish cities, where pick collectors from all over the country share their stories and show their collections. It’s a good occasion too for trading or selling picks. Do you like this kind of events? What do you think about it?

I think its a great idea if u have managed to pick up a few of the same pick then you can trade them off for something else.

Let”s tal a little bit about the band”s present. What are the next projects of the band?

We have a couple of shows coming up in Japan in November ,which is a first for the band so we are all very excited about this , and then we close the year at Hard Rock Hell NWOBHM fest in Sheffield.

Apart from that the band are busy writing for the new album , and looking for a late Spring 2017 release.

Tell us about your upcoming shows

We also in the process of setting up a European Tour for late April early May , it would be nice to include Spain in the routing if we possibly can.

Thank you Ken, we hope to see you soon back in Spain!

Just a massive thank you from all of us in Blitzkrieg to our friends and fans in Spain for sticking by the band after all these years and also to the new friends we are picking up along the way\r\nWell try our upmost to try and not let it be another six years before we play spain again.